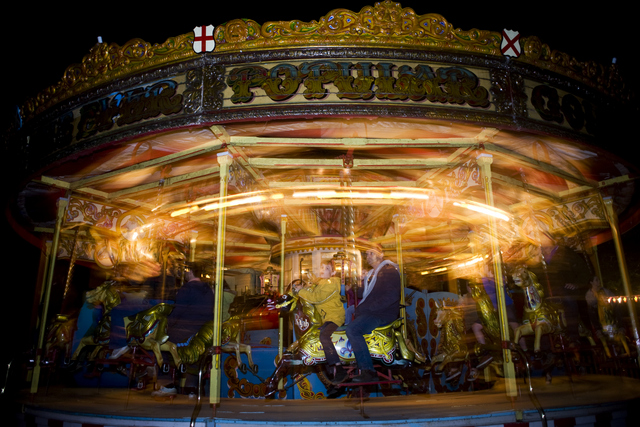 The schools may have returned but the excitement continues at Hollycombe as the attraction stages its popular Fairground at Night evenings on Saturdays during September and October.

Enjoy a trip down memory lane with the sights, sounds, smell and atmosphere of a vintage Edwardian Fairground at night, as the Hollycombe Working Steam Museum on the Sussex / Hampshire border stages its popular Saturday evening openings in September and October.

Based on the Surrey / Hampshire / Sussex border at Liphook, Hollycombe Steam in the Country offers visitors a nostalgic look at how the Victorians and Edwardians used steam as an instrument of work and play, and features a number of popular fairground sideshows of the period. With steam-driven rides such as the Razzle Dazzle (considered to be the world’s first ‘white knuckle ride’); the Gallopers and the magnificent 102 year old Big Wheel offering evening views over the twinkling lights of the South Downs, a trip to Hollycombe offers visitors both nostalgia and a frisson of excitement! After enjoying the rides visitors can sit back and relax in the Bioscope – a pre-cursor to the modern cinema – typical of the travelling shows which first brought film to the public, or reflect on themselves with a walk through an original Hall of Mirrors. And, for the first time in a number of years, Hollycombe’s Haunted House – the oldest in the world – will be open for evening visits following extensive restoration. ‘Everyone loves Fairground at Night’ said Hollycombe Trustee Brian Gooding. ‘The atmosphere created by the lights, sounds and steam is unique to Hollycombe – our rides are operated by volunteers and these evenings always prove most popular. Warming refreshments are available too!’

Fairground at Night evenings take place on 16th September, 23rd and 30th September and 7th and 14th October, and then again on the 21st October, this time with a Halloween theme, when the Quarry Railway is also planned to be open. On both the 14th and 21st October, a free minibus shuttle service will operate between Hollycombe, Liphook Railway Station and Liphook Sainsbury’s, courtesy of the East Hampshire Community Rail Partnership.

Entrance to Fairground at Night / Halloween Fairground at Night is just £16 adults; £14 seniors or £12 child, with family saver tickets available, offering unlimited rides on the Fairground. Tickets entitle complimentary return visits to Hollycombe on most open days during a calendar year. Hollycombe is also open on Sundays between 11am - 5pm until 8th October. For more info, please call 01428 724900, e-mail: info@hollycombe.co.uk  or visit www.hollycombe.co.uk